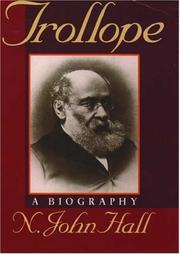 Finding the relationship between the life and the art is one of the major challenges to a biographer of Trollope. As editor of the collected works (62 volumes including 47 novels) and the letters, Hall (English/Bronx Community College) may be one of the few scholars to have read all of them. He concludes that the vulgar, outspoken, quarrelsome persona of the real Trollope was as much an invention as the narrative voices in the novels, a mask to protect the tenderhearted, lonely little boy who survived in the ursine body of the adult. Unlike that of Dickens, Trollope's wretched childhood never enters his novels. One of seven children, all but two of whom died in childhood, he was neglected by his penniless father and his flighty mother. Unpopular and inept as a day student at Harrow, Trollope left school to work for the post office at age 19, married, fathered two sons, and published his first novel at age 32. Between 1859 and 1867, when he retired from the p.o. as an executive, he traveled to Egypt, Australia, and the US, then settled near London to enjoy life as literary gentleman. He entertained, hunted, attended London clubs, and wrote for three hours a day, every day, starting at 5:30 A.M., 25 words every 15 minutes. His productivity, his disciplined and methodical approach, and his self-deprecating belief that writing is a craft comparable to shoemaking led others to question his status as an artist. Even his familiar topic seemed uninspired: the romance of everyday life among the middle and upper classes, focusing on the nuances of feeling and conscience that the stormy, impulsive Trollope seemed incapable of. But in the fictions of the Barchester series and the Pallisers, Trollope vindicated himself, providing models of loyalty and friendship, manners and values for the very classes that had rejected him as a child. Clear, direct, cautious, respectful: a useful companion to the more interesting novels and letters—but between the masks and the fictions, the real Trollope is yet to be discovered. (Twenty-seven illustrations—not seen.)