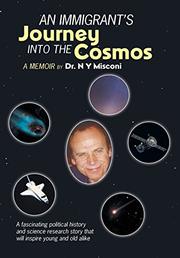 An Immigrant's Journey into the Cosmos

In Misconi’s (Studies of A Laser/Nuclear Thermal Hardened Body Armor, 1992, etc.) third book, an Iraqi native follows his dream and becomes one of the top space scientists in the United States.

Becoming a space scientist is difficult under any circumstances, but for Misconi, it was even more difficult than usual. A native of Iraq when that country’s space program was in its infancy, Misconi decided at a young age that space science was his career passion, which he pursued with single-minded determination. Today, having worked on such projects as the space shuttle, Skylab, and the Strategic Defense Initiative, or “Star Wars,” he is one of the leading experts in the U.S. on the myriad possibilities and problems in space. The book chronicles the path Misconi took to reach his current orbit. The account of his early years in Iraq is particularly interesting, showing that life in the pre–Saddam Hussein years wasn’t easy either, as when Misconi feared he would get in trouble for merely reporting that an ice sculpture statue of a general was melting. He was then the only astronomer in Iraq, and he recalls doing TV broadcasts with guns pointed at him. After he made his way to the U.S., Misconi’s research was often financed by “soft money” (i.e., grants and such), a precarious position due to the uncertainty of what would happen once the grant expired. While the book is mostly written so that non–rocket scientists can understand it, it doesn’t always qualify as light reading, particularly with sentences like: “The precession of the perihelion of Mercury was not due to the general relativity as Einstein postulated but due to the oblateness of the sun.” Still, following Misconi’s career—from conversing with astronaut Buzz Aldrin to working on high-profile space projects—shows that reaching for the stars isn’t impossible.

Although occasionally too technical, an autobiography with universal appeal.