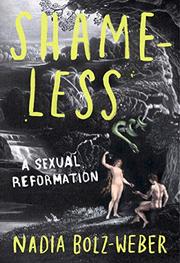 The whip-smart pastor and author of Accidental Saints: Finding God in All the Wrong People (2015) channels Martin Luther and calls for the church to reform its approach to sex.

Too many of Bolz-Weber’s congregants have been hurt by Christian teachings about sex: couples who marry as virgins only to find they can’t “flip a switch” to suddenly approach “sex as joyful and natural and God-given”; or middle-aged women who can’t bring themselves to wear a V-neck because they are haunted by teachings about modesty they learned as teens. The author, who is now divorced, insists that the church should not be more faithful to abstract principles than to people. “If the teachings of the church are harming the bodies and spirits of people,” she writes, “we should rethink those teachings.” Indeed, a healthy attitude toward sex might be more faithful to the Bible’s teachings anyway. In the Creation story, notes Bolz-Weber, Adam and Eve were told to be fruitful and multiply—“the very first blessing was sex.” Among many other issues, the author, a recovering alcoholic and former comic, addresses pornography, abortion, and debates about transgender bathroom use. Consistent with the title, Bolz-Weber wants readers to feel unashamed about their bodies even as she invites them to grieve the moments in their sexual histories where they have been hurt or caused hurt. She also writes straightforwardly about desire: “I know that when I see my lover, something within me uncoils…a wildness, part velvet, part forest fire.” Not exactly the usual stuff of Christian sex books—and that’s a good thing. Throughout, the author’s voice is inviting, as is the narrative layout: Homiletical reflections on scriptural themes are set in clearly separated boxes, and illustrations—e.g., a risible page from a Christian workbook that details the kinds of cosmetics and speech that increase femininity—make the book an easy, enjoyable read.

Sure to be helpful to many readers and just as sure to be controversial.