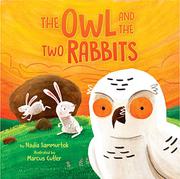 THE OWL AND THE TWO RABBITS

A cautionary tale about rabbit sisters who disobey their parents and find trouble as a result.

Even though their parents told them not to play out in the open tundra, two rabbit sisters climb atop rocks on a hillside. Trying to outdo each other in a jumping game, the rabbits soon see a large white owl land in front of them. Its talons are sharp and its belly grumbling. He grabs the two rabbits and won’t let go even as he is unable to take flight due to the way they squirm and fight. A comical scene follows as the rabbits work together to throw the owl off balance. The owl’s wife coaches her partner from the sky, telling him to let go of one of the rabbit sisters. Luckily for young readers who might be distressed at the thought that the protagonists might be eaten, the owl’s greed is overwhelming, and he will not listen to her advice. By sticking together, and believing in themselves, the rabbit sisters hatch an escape plan and learn an important lesson. The dark nature of the tale is mitigated by the style of illustration: Bright pastel colors cover each page, and the soft features of the owl and pink-eared rabbits alleviate some of the tension in the life-and-death struggle.

This traditional Inuit story from Nunavut teaches children the importance of parental guidance—with a dash of excitement.