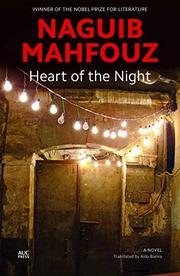 HEART OF THE NIGHT

“Al-Rawi. I am Jaafar al-Rawi, Jaafar Ibrahim Sayyid al-Rawi.” The pride in which the protagonist of Mahfouz’s novella takes in giving his name is about the only moment in which he is able to take any pride at all. His grandfather has left his fortune to a waqf, a kind of charitable trust, and not a cent to him. Thinks the narrator, “I was convinced that no one rejected his heirs for no reason. What had you done, Jaafar?” What had he done, indeed? The unstated question, prelude to the narrator’s suggestion that he try talking to his grandfather rather than filing a lawsuit, takes Jaafar deep into his past: He tells of a father who died young, a mother who “talked to the jinn, the birds, inanimate beings, and the dead,” and a grandfather who doesn’t seem such a bad guy and who encourages Jaafar’s religious leanings by saying, “You will find out that every book is a book about religion and every location is a place of worship, whether in Egypt or in Europe.” Ah, but then the secular enters, and things begin to sour: Jaafar marries a woman who “was only a sexual provocation; not a housewife, a mother, or a woman in the true sense of the word” (it’s to be remembered that Mahfouz, though politically progressive, was born in 1911), divorces, remarries, then lands in jail for having killed a frenemy who objected to Jaafar’s quest to found a political party based on a concocted ideology that was “the logical heir of Islam, the French Revolution, and the communist revolution.” There’s an awful lot going on in all that, and Mahfouz, an anti-Islamist, seems to be subtly criticizing events of his time. Whatever the case, now Jaafar is left to wander in the ruins of his grandfather’s villa, broke and perhaps insane: “Let life be filled with holy madness to the last breath” is his last utterance.

An elegant if perplexing tale by one of modern Arabic literature’s greatest voices.