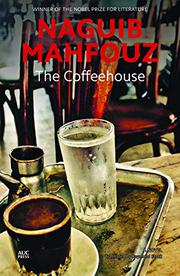 As it opens, the characters of Mahfouz’s novel, first serialized in a Cairo newspaper in 1988, are young boys who meet in 1915 in elementary school and who, years later, “will all be buried in the Bab al-Nasr Cemetery.” Five at the core of the group “have never left each other” while others will move away, fall out of touch. Some are rich; some aspire to wealth and influence in a time when young Egyptians are increasingly insistent on independence from Britain. A couple are faithful observers of Islam—one is Ismail, a boy who “never stopped imagining God in a majestic form whose grandeur had no limit”—while others are “without any sort of religion at all.” Yet all harbor the same enthusiasms, eagerly watching Tom Mix cowboy movies at the local movie parlor, fighting the neighborhood bullies and getting trounced in the bargain. As they grow into adolescence, the boys find a second home in a coffeehouse far enough away from their homes that they won’t be seen smoking and whiling away the hours playing dominoes and talking politics, as they will do for years to come even as they come of age, marry, struggle, and try to cope with onrushing events to greater or lesser degrees of success: “Hamada al-Halawani’s life continued between the palace, the houseboat, and Khan al-Khalili, while he added the Allies and the Axis to his vacillation between schools of thought,” writes Mahfouz of one at the outbreak of World War II. Covering a broad sweep of nearly a century of history, Mahfouz’s last novella is a single narrative, not broken into chapters but flowing like the Nile and time itself. Writes the translator in a welcome afterword, while Mahfouz and his generation are gone, the coffeehouse still stands, full of “old men from the surrounding neighborhood playing dominoes and drinking tea long into the evening.”

An affectionate evocation of lost youth and life’s passage by a seasoned storyteller.