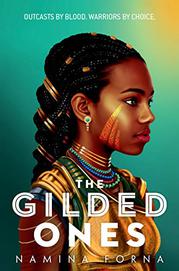 From the Deathless series, volume 1

Every year adolescent girls in the patriarchal kingdom of Otera prepare for the Ritual of Purity that determines whether they can join their communities as pure-blooded women or be cast out and branded impure monsters. Brown-skinned, gray-eyed Deka yearns to prove she belongs, but when her blood runs gold, she’s revealed to be an alaki—a near-immortal woman warrior—and is carted away to become the front line of defense for the people who’ve discarded her. With measured focus, debut author Forna creates a provocative world filled with fantastical creatures, centuries-old divine conflict, and overt feminist messaging around gender inequity and “purity.” Also compelling is Forna’s ability to capture feelings tugging on the consciences of many, telling them they are unworthy of life, liberty, and unconditional love because of who they are. The character development is a bit superficial, unfurling quickly with movie montage–like speed. There is celebration of diverse body types, some peripheral queer representation, and ethnic diversity that roughly correlates with the real world (e.g. a character called Li is from the East, and Northerners have pink skin and blond hair). The plot-twist climax is hinted at throughout the book, held just out of reach until the pieces fall neatly together. Unfortunately, the energy then peters out for the falling action and epilogue.

An adventurous and relevant fantasy that strives for gold but settles, in the end, for silver.