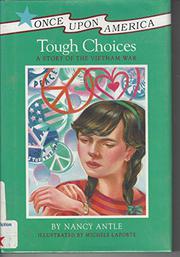 A Story of the Vietnam War

A less successful entry in the Once Upon America series, partly because the causes and domestic consequences of the Vietnam War were so complicated that it's difficult to make them comprehensible to an elementary-school audience. Marine Corporal Mitch Morgan, returning from a year's tour in Vietnam, encounters anti-war protesters that include his own teenage brother. (Younger sister Samantha, who narrates, is trying to make up her own mind about the war.) When Mitch learns that his best friend has been killed in action, he signs up for another tour, hoping he can teach new ``grunts'' how to stay alive. Readers will need to know more about the war's political background and the reasons for the sometimes-violent protests against it than they will be able to glean from the expository dialogue here. Tighter editing (do we need to know how the family was seated to watch TV?) and less extraneous period detail might have helped. Illustrations not seen. (Fiction. 8-11)