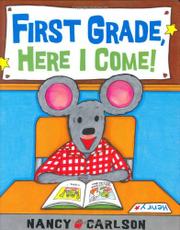 Henry has graduated from kindergarten, but that doesn’t mean he has necessarily left it behind. When his mother asks how his first day in first grade went, he says, “I didn’t like it because I missed kindergarten.” His mother encourages him to talk about it. As Henry goes about debriefing her, he develops a whole new picture. The teacher was new—and a man!—but he was also a good guy, as evidenced by the fact that he liked Henry’s pet worm. There were new kids, too, but Henry had already made a friend in Oswaldo. There was a cool science corner with a really fast guinea pig (discovered when you just happen to open Curly’s cage door). Minor problems are knit up, a little independence is dispensed and the first day of first grade turns out actually to be pretty neat. Prospective first-graders will find Carlson’s story enormously buoyant, floating those first-day cares away on the backs of her sweet, lopsided characters. (Picture book. 5-7)