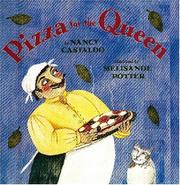 PIZZA FOR THE QUEEN

A rather puckish rendition of how the pizza we know and love in the U.S. came to be—more or less. In 1889, pizza had already been a popular Naples foodstuff for decades. On June 11 of that year, the queen’s emissary visited Raffaele Esposito. Queen Margherita had heard that Raffaele made the best pizza in the city and she wanted to taste some. Raffaele goes off to obtain the finest olive oil, mozzarella and sausage for the queen. He makes one with garlic and tomato, one with mozzarella, sausage and basil. For the third, since the cat had eaten the anchovies he set aside, he’s inspired by the colors of the Italian flag to make a red tomato, white mozzarella and green basil pizza. The queen loves them all and the new one is named for her. Potter’s sunny palette and comically exaggerated figures live in a cartoon Napoli where Raffaele can twirl pizza dough in each hand simultaneously. The recipe included does not allow for the difficulties of making pizza from scratch, and doesn’t explain much that might be needful, but that’s a small quibble. Certain to make readers long for a slice. (recipe, author’s note) (Picture book. 5-9)