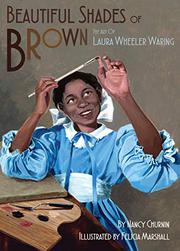 The Art of Laura Wheeler Waring

Laura Wheeler Waring saw “brown [as] a rainbow” and painted it that way.

Growing up in turn-of-the-20th-century Connecticut in a middle-class African American household, Laura works for “hours mixing and blending” paints in order to replicate the shades she sees in her family members. Determined to pursue a career in art, she studies at the Pennsylvania Academy of Fine Arts and then in Paris, honing her craft. Attending a concert given by a young Marian Anderson, Laura vows to paint the singer someday. A 1944 commission for “portraits of important African Americans” finds her painting the likenesses of Alice Dunbar Nelson, James Weldon Johnson, W.E.B. Du Bois—and Marian Anderson. Churnin ably conjures the painter’s process, thrillingly describing Laura’s painstaking combination of shades to create just the right browns for each subject. She is less adept at helping readers understand the barriers Laura must have faced, saying only that “there weren’t portraits of African Americans in museums” during Laura’s childhood and that her art education was undertaken among mostly white peers; one sentence in her author’s note acknowledges the limited opportunities available to African Americans of Laura’s time. While the evocation of Laura’s joy in her art is admirable, skimming over the everyday injustices she must have faced paints only half her picture. Marshall’s illustrations are appropriately painterly, capturing the play of light on her characters’ brown faces.

An important story only partially realized.