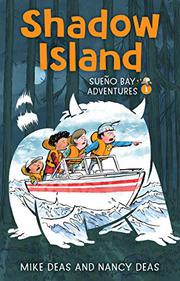 Moon Creatures, missteps, and mayhem lead a young boy to find a place to call home in this new graphic-novel series.

Since his parents’ deaths, Ollie has been shuffled among various family members and is now sent to live with his elderly grandfather in the small, fictional town of Sueño Bay, “Home of the Supernatural,” on Robertson Island off the coast of British Columbia. Unhappy with this remote life, he plots leaving the boring town to go back to the mainland. The day before he plans to make his escape, a few of his new classmates pull him into an adventure in which they encounter the Moon Creatures, horned, raccoonlike mammals that are endangered due to environmental factors. In trying to save the sometimes-adorable, sometimes-terrifying creatures, they embark on a perilous journey. Ultimately the story leads to a satisfying ending for all, with Ollie finding a sense of home. Inspired choices in paneling and use of line keep the eyes moving, propelling the story forward while still bringing readers into the fully realized rainy and rural Pacific Northwest setting. Ollie has pink skin and black hair; side characters are interesting and full of personality and have varying racial presentations. There is a refreshing, realistic economic diversity shown, with characters living in houses, trailers, and refurbished school buses.

Underlying messages of environmentalism, friendship, and home make this magical mystery a win.