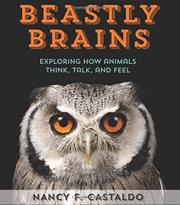 An exploration of animal intelligence.

Castaldo opens with a discussion of brainpower before summarizing historical thinking on animal cognition and then presenting evidence of it, in the form of a dizzying array of experiments on such subtopics as decision-making, empathy, a sense of fairness, and communication, among others. Candy-colored pastel shades and striking photographs make flipping the pages a pleasure, but actually reading them is something of a chore. Sidebars often appear out of sequence with the text and are of varying levels of utility, as is also the case with photo captions. Low points include a reference to the author’s middle school report on dolphins and a photograph of a dolphin alone in a tank that’s labeled, “A dolphin at the National Aquarium is studied by cognitive researchers.” Chapters are broken up into subtopics with catchy headings (“The Hive Brain”; “Emo Rats”) except when they are not, as with a relatively lengthy discussion of interspecies communication that wanders from bonobos to dolphins to Peter Gabriel to orangutans. The book’s sense of its audience is uncertain. Profligate use of exclamation points and simplistic “what would you do” scenarios seem geared to younger readers, while the un-glossed use of such terms as “habeas corpus” and “prosocial,” as well as a conceptually complex model of brain processing, assumes a fairly sophisticated audience.

The book’s high-interest topic is ill-served by its execution.