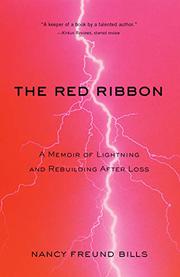 A Memoir of Lightning and Rebuilding After Loss

A debut memoir that recounts a woman’s tragic loss and hard-won survival.

On July, 23, 1994, lightning struck Bills’ husband and their son—pseudonymously called “Geoff” and “Teddy” here, respectively—as they were kayaking off the coast of Maine. The strike took Geoff’s life and nearly did the same to Teddy. The author and several members of her family, including Teddy’s older brother, “Simon,” and his wife, rushed to the hospital in the nearby town of York, Maine. It was initially touch and go for Teddy, but he came through. Then, as Teddy recuperated physically, he and the author faced psychological and spiritual recuperation—which sometimes seemed to be a matter of taking one step forward and two steps back. After this tragedy, death seemed to shadow the author for the next few years; her aged parents back in Montana passed away, as did her uncle and Geoff’s sister, who was such a rock for her after the lightning strike. These losses engender a booklong meditation on mortality. However, Bills does survive the ordeal, and an afterword lets readers know that today, she, Teddy, and Simon are all doing OK. Memoirs of loss and survival are rather common, but what sets this one apart is Bills’ extraordinary perceptiveness and writing talent, as when she notes that “I’m a woman with an emotional thermometer always in her mouth.” Bills also raises intriguing questions, such as whether the obituary cliché “he died peacefully” is really ever true. Essentially the book is a collection of essays, but she uses fictional techniques when appropriate, and some chapters are given over to very impressive poetry. She poignantly evokes a happier past in her chapters about Geoff (they were separated at the time of his death) and their young family. And a chapter titled “The Myth,” in which she asks Geoff questions directly, is exceptionally and deeply moving. There are even moments of goofiness in a chapter on a graveside service (“Planting Iris”), which may take some readers aback, although it’s clear that the author understood the need for occasional levity.

A keeper of a book by a talented author.