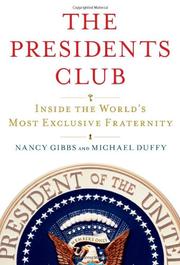 Inside the World's Most Exclusive Fraternity

by Nancy Gibbs and Michael Duffy

Two Time magazine editors chart the zigzag arc of relationships among the men who have occupied the White House since the mid-20th century.

With their knowledge of the territory of presidential politics and personality, Gibbs and Duffy (co-authors: The Preacher and the Presidents: Billy Graham in the White House, 2007) assemble a compelling account of their tangled relationships. When Truman called on Hoover to help with post–World War II recovery in Germany, the latter was in political purgatory, reviled by his own party. Throughout this massive work, the authors present numerous instances of presidents warming to their predecessors in surprising ways. Sometimes mutual admiration was already in place (Truman and Eisenhower—though it later disintegrated); sometimes, antipathy (Clinton and Bush II). But almost always, the sitting presidents found in their predecessors some solace, willing ears and sound advice. Jimmy Carter emerges as a loose cannon, combining vast international experience (and a deep humanity) with a maverick spirit and a yearning for the limelight that caused some of his successors to cringe and curse. (Oddly, the authors do not say much about Carter’s relationships with Bush II or Obama.) JFK turned to Ike at crucial times (Bay of Pigs); Clinton and Nixon developed a close relationship, though Nixon once threatened to write a negative op-ed if Clinton did not consult him about Nixon’s upcoming trip to Russia. It was Reagan, write Gibbs and Duffy, who first called Nixon back from exile. Gerald Ford emerges as a genial soul, telling scandal-ridden Clinton that he’d better confess his lies. Perhaps the closest of all relationships was between Clinton and Bush I, a friendship literally birthed by a tsunami.

In a well-researched, disinterested analysis, the authors show that collisions of ego, personality and politics can often result in creation, not destruction.