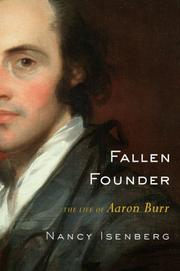 The Life of Aaron Burr

Persuasive reconsideration of possibly the most scandalous figure in American history.

Washington distrusted him. Adams, Jefferson, Madison and Hamilton, despite disagreements among themselves, all loathed him. Is it possible to rehabilitate the historical reputation of Hamilton’s killer, the vice-president indicted for murder, the adventurer tried for treason, the mysterious Aaron Burr? Isenberg (History/Univ. of Tulsa; Sex and Citizenship in Antebellum America, 1999, etc.) skillfully submits a brief that her subject, himself an innovative and eloquent attorney, would have been proud to author. From a lineage more distinguished than any other Founder’s (his mother was the daughter of noted Puritan Jonathan Edwards, his father president of the college that became Princeton), Burr was a Revolutionary War hero and later established a thriving legal practice. From the cauldron of New York’s tribal and contentious politics, he emerged as a charismatic leader and an unparalleled organizer whose thoroughly moderate political convictions raised suspicions about his loyalty. Traduced by both Anti-Federalists and Federalists as an “intriguer,” he appears, as Isenberg ably demonstrates, only to have been more forthright in his machinations than his contemporaries. His mastery of the savage politics of his day, she argues, not the invented personal vices reported in the defamatory press, earned him the scorn of thwarted rivals whose names are among the most glittering in American history. In some ways ahead of his time, Burr supported women’s rights and pushed for reconciliation of the new nation’s agrarian and commercial interests. He was, however, distinctly 18th-century in his insistence on points of personal honor that led to the infamous duel at Weehawken and in his enthusiasm for speculation, a fever shared by Washington and Hamilton. This last partially explains his Mexican adventure, the consequent 1807 treason trial and his self-imposed European exile following acquittal. Amazingly, he returned to New York to practice law for many years before dying in 1836.

Readers of Thomas Fleming’s Duel (1999) and Ron Chernow’s Alexander Hamilton (2004) might profitably turn to this splendid biography for a necessary and overdue corrective.