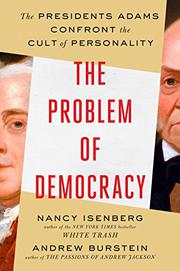 THE PROBLEM OF DEMOCRACY

The Presidents Adams Confront the Cult of Personality

An unsettling yet well-presented argument that the failures of John and John Quincy Adams illustrate a disturbing feature of American politics.

John Adams (1735-1826) became an early proponent of independence in the Continental Congress. Isenberg (White Trash: The 400-Year Untold History of Class in America, 2016, etc.) and Burstein (Democracy's Muse: How Thomas Jefferson Became an FDR Liberal, a Reagan Republican, and a Tea Party Fanatic, All the While Being Dead, 2015, etc.), professors of history at Louisiana State University who co-authored Madison and Jefferson (2010), show how he disliked aristocracy but worried equally about the problems of a mass electorate. He believed that selfish humans would look after their own interests and persecute minorities they disliked. His solution was a strong president to oppose powerful interests and keep the majority from abusing fellow citizens. Missing the point, Thomas Jefferson considered Adams a closet monarchist. He entered office in 1797 as an independent in a nation with two parties: Hamilton’s Federalists and Jefferson’s Democratic-Republicans. Both worked successfully to ensure his defeat in 1800. It did not help that Adams was quarrelsome and insecure, lacking Jefferson’s cosmopolitan appeal. John Quincy Adams (1767-1848) became his father’s secretary as an adolescent and spent a lifetime serving the nation as a diplomat, senator, and secretary of state. Equally testy and independent, he suffered the misfortune of running in the 1824 presidential election, finishing second to Andrew Jackson. No one obtained a majority, so the House of Representatives determined the president, choosing Adams. Of course, this enraged Jackson and his Democratic Party, which controlled Congress, ensuring that Adams endured an unhappy presidency. Besides lively, warts-and-all portraits of the men and the surprisingly nasty politics of the young nation, the authors delve deeply into their philosophies and those of Enlightenment thinkers who influenced them. They conclude that both were more intelligent and experienced than most two-term presidents but lacked the common touch, essential in America, where we “glorify equality but ogle self-made billionaires and tabloid royalty.”

A top-notch dual biography of two presidents who deserved better.