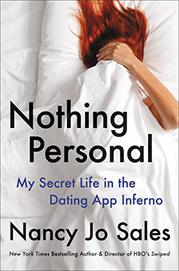 My Secret Life in the Dating App Inferno

Despite the title, a very personal—and thoroughly researched—memoir of dating younger men.

In this warm, witty, and rigorously honest memoir, a "Confessions of an English Opium-Eater–type exposé on dating apps,” Sales takes us behind the scenes of her work as a journalist and filmmaker and her own experiences with Tinder. The most affecting of these involved a mostly irresistible, sometimes disappointing young man she calls Abel, 23 to her 49 when they met, with whom she remained involved for four years, while both continued swiping and hooking up with others. The author, “a single mom by choice,” managed to keep her daughter, Zazie, in the dark about her love life—thank God for summer camp—and relied on a supportive network of friends and the proprietors of her neighborhood bar and cafe to help her keep some perspective on her experiences. Ironically, the same year she met Abel, Sales went to war with Tinder by publishing in Vanity Fair what was apparently the first article to criticize the dating app. The company fought back with a smear campaign, but Sales continued working—and dating. On the memoir side, Sales writes engagingly about her parents and her coming-of-age in Florida waiting tables in their hippie diner, and she takes us through some failed relationships, her successful journalism career, and stories of dating during the pandemic. The personal narrative is illuminated by often chilling research—e.g., a 2014 Harvard Business School study that “should dispel any notion that millennial men ‘see women as equals’ ” or a 2019 survey that found “31 percent of the women…reported being sexually assaulted or raped by someone they had met through an online dating site. Sales makes it abundantly clear that it’s not pretty out there.

Against all odds, this unsparing, must-read portrait of modern dating and sex is also a love story.