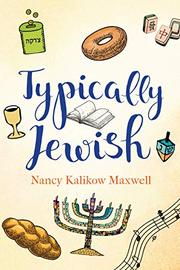 A spirited examination of the essence of Jewishness.

Acknowledging that Jews “don’t know if we are a religion, a civilization, an ethnic group, a race, all or none of the above,” librarian and journalist Maxwell (Sacred Stacks: The Higher Purpose of Libraries and Librarianship, 2006, etc.) maintains, nevertheless, that Jews share definable traits. Drawing on abundant sources, including the Talmud, Judaic scholars and historians, rabbis, a cadre of friends that make up her own “Jewish Jury,” and assorted figures from popular culture (Woody Allen, Groucho Marx, Jack Benny, and Joan Rivers, among many more), the author brings a lively curiosity to her lighthearted investigation. Describing herself as a “spiritual-but-not-religious Jew” who married a non-Jew and has raised her daughter as a Jew, she feels an “unshakable loyalty” to her Jewish identity and sets out to discover what makes Jewishness distinctive. Worrying, she asserts, is a special Jewish trait, perhaps inspired by ancient disasters (the Ten Plagues, for example) or persecution. Other shared behaviors include taking pride in achievements attained by Jews; an affinity for joining social and charitable groups; and particular food choices, such as cheesecake, bagels and lox, and gefilte fish. Her assertion, though, that Jews have a “unique relationship” with food might surprise “an Italian Catholic momma” whose “religion doesn’t even esteem food as much as mine.” Comedy seems to Maxwell also particularly Jewish. “Over the past forty years,” she writes, “an estimated 80 percent of America’s leading comedians and writers have been Jews.” The search for typical traits leads, not surprisingly, to the stereotypical: Maxwell debunks the derogatory image of a “Jewish nose” but not the notion that Jews talk faster and louder than others. She asserts that verbal sparring results from Jews’ tendency “to trust that with enough talking, arguing, debating, and analyzing, the truth will emerge.” Besides examining traits, Maxwell considers her own apparently uncanny “Jewdar” that enables her to recognize other Jews. Urging Jews to talk about her book with others, she provides a 30-page appendix of hints to structure discussion.