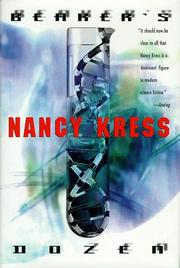 Kress’s first story collection since The Aliens of Earth (1993) comprises 13 tales, 1991—97, and includes the original novella-length version of her splendid Beggars in Spain. Kress shows her talents to best effect when combining several situations and ideas: an alien detective story, in which the murderer does the investigating, that probes the nature of consensual reality; designer drugs, mysterious deaths, and the piercing emotions aroused when love ends abruptly; a fine Sleeping Beauty variant; Adam and Eve—the feminist version; and an odd, provocative, insidious yarn that, in one of several possible interpretations, promises that on Judgement Day it will be God, not humanity, who—ll be judged. Also on the agenda: ideal beings and chaos theory; genetic engineering and vengeance; cloning; drug-resistant bacteria on the rampage; plus implants, ballet, and mothers. Finally, in a lighter vein: thanks to his interfering old schoolteacher, Walt Disney turns his back on cartoons and instead becomes a third-rate painter; and emotions are acquired, displayed, and discarded like designer fashions. With her focus always on people rather than on gadgets or even ideas, Kress at her best is as incisive and subtle as any. And if you don’t like the stories, you can always ponder the collection’s baffling title.