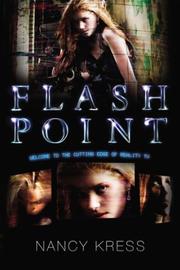 Amy Kent is only 16, and she’s bone-weary of the responsibility of supporting her resentful younger sister and terminally ill Gran. But the global economic collapse has left most people in desperate straits, so when Amy gets a chance for good pay with family medical benefits, she grabs at it despite her doubts. As one of seven teenagers on Who Knows People, Baby—You?, she is under constant camera surveillance that allows viewers to compete to predict how each cast member will respond to unexpected situations. But as ratings pressures and political tensions mount, the scenarios become more dangerous, and Amy and the rest become less and less certain of what is staged, what is real and whom to trust. The theme of corrupt adults manipulating youth into violence and death to entertain a decadent audience will inevitably invite comparisons to the Hunger Games trilogy, as will the breakneck, twisty plot. The day-after-tomorrow setting, anchored by brand-name allusions and crises ripped from the headlines, adds both eerie familiarity and terrifying plausibility. Most striking, though, is the complex characterization, with its emphatic insistence that no one—hero or villain—is anything less than a complicated mixture of good and bad, strength and weakness, compassion and selfishness.

While the adrenaline rush will draw readers in, it’s the unsettling question posed by the program title that will linger.