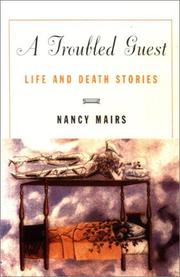 A series of personal essays about death, by someone who has seen more than her share of it recently and who, due to her own advancing multiple sclerosis, has reason to contemplate her own.

As she’s done throughout her earlier work (Waist High in the World, 1997, etc.), Mairs draws on her own often harrowing experience to illuminate a subject Americans find difficult to confront: in this case, death. As she puts it at the start, “few seem capable of contemplating their own end . . . I thought I might try.” In clear, unaffected prose that quickly establishes—along with her candor—an intimacy with the reader, Mairs begins by explaining her feelings toward her own impending death. At this point, her MS has confined her to a wheelchair, rendering even the simplest things, such as using the toilet, major undertakings. As someone who views death as both a natural condition of life and who also believes that the essence of a person survives death in some form, Mairs appears to have attained an enviable equanimity respecting her own mortality. Yet even she concedes that the prospect awakes a nostalgia for those pleasures that make us human, like the “bob and snuffle of a newborn’s head against a shoulder.” As she puts it, “I find myself overcome with grief for a slew of ‘nevers’ and ‘never agains.’ ” Despite the obvious loss that death entails, Mairs urges us to confront it openly and without fear. Those mourning loved ones, for instance, suffer when their friends, out of a misguided sense of politeness or simple embarrassment, fail to acknowledge the death with anything more than a mumbled platitude. In a similar vein, Mairs warns that death with dignity is possible, but only if death is contemplated in advance so that the end, particularly with respect to medical intervention, can be controlled.

Not self-help by any stretch, but it will be of interest to anyone recently touched by death.