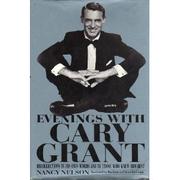 Engaging, warm chronological memoir of Cary Grant, assembled from his own words and those of friends and fellow actors by Nelson, who represented Grant on the lecture circuit during his last years. This is a big, solid Grant biography that towers above recent books that show the actor ingloriously as a neurotic tightwad and bisexual. Nelson met Grant while arranging for his ``Evenings with Cary Grant''—Grant made 36 such unrehearsed appearances, speaking intimately to 1,000 to 3,000 listeners and answering questions for about two hours a show, to standing ovations. While Nelson pastes together her hundreds of quotations with quiet skill, she sometimes gets things wrong, as with Grant spending heavily to track down Plaza-owner Conrad Hilton to complain about getting only one half of an English muffin—a story that makes Hilton seem cheap. In fact, Grant got three halves and explained to Hilton that he was losing good will by not offering the fourth. Grant, born in Bristol, England, as Archie Leach, left school at 13 to go on the road as a dancer-tumbler-stilt-walker-pantomimist with the Pender troupe, skills that stayed with him for life and that brought him to America where he became a Coney Island stilt-walker, then a success in Broadway musicals. His first film was a bit in Singapore Sue, but it wasn't until 1937's The Awful Truth (directed by Frank Capra) that his gift for suave farce and physical comedy set him up as Hollywood's greatest farceur. By then he'd married and been divorced by Virginia Cherrill, Chaplin's blind girl in City Lights. Among the more moving episodes here is Grant's romance with young Phyllis Brooks, whose mother dampened any wedding bells. All speak of Grant's grace, taste, generosity, great wit and style, and the smashing quotes from his ``Evenings with...'' prove every word. Forget the other books, this is it. Superb. (Sixty-eight b&w photographs—not seen.)