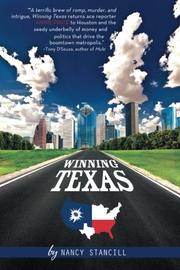 Annie misses her time as an investigative journalist, a gig the Houston Times eliminated a few years ago before promoting her to assistant metro editor. She may soon return to the field, though, when a reporter quits and leaves the newspaper short-staffed. And there’s a lot of story material in her area. State Sen. Sam Wurzbach, for starters, pushes a German-Texas agenda, which would see designated counties emphasize German language and culture. The senator has support from some who see tourism potential, but, sadly that includes seedy strip-club owner Kyle Krause. Adamantly opposing German-Texas are secessionists, who believe it will obliterate their chances of converting the state into an independent republic. Annie’s dealt with the secessionists before, like two particularly dangerous ones on the lam, either hiding out in South America or sneaking back into Texas. Meanwhile, a possibly Eastern European body floating in the Houston Ship Channel may be tied to human trafficking, and Betsy, the 16-year-old daughter of ex-politician (and Annie’s “almost-boyfriend”) Tom Marr, has run away. Things take a momentous turn when someone Annie knows turns up bludgeoned to death, followed shortly thereafter by another murder. So Annie and her colleagues do what journalists do best—investigate. The author loads her narrative with seemingly unrelated subplots that gradually and sufficiently come together. There’s little mystery since Stancill, once a reporter herself, focuses much of the plot on Annie’s time at a slowly dying newspaper. While the murderer (or murderers) isn’t hard to pin down, the sudden shakeup at the office, likely resulting in fewer jobs, becomes a fascinating storyline. Annie, too, is a sterling protagonist, surprisingly humble considering she’s a guy magnet, from old flame/fiance Jake Satterfield to smitten co-worker Travis Dunbar. As a pseudo-gumshoe, Annie doesn’t do much, especially when people merely show up at her door with pertinent information. But she willingly puts herself in peril to expose villains, while a significant character’s death near the end (that’s not a murder) is unquestionably shocking.

Even if she’s not a crime-solver, the beguiling protagonist should attract readers just as much as she attracts trouble and men.