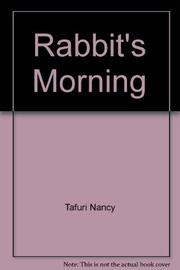 Rabbit's Morning might be seen as a variation (or reduction) of Tafuri's Have You Seen My Duckling—itself a very simple rendering of a common nursery-book theme. Here, in her characteristic bold, flat forms, Tafuri shows a rabbit sharing a succession of scenes with various animal families; mice, opossums, swans, deer, and others. There is also, on every page, a pheasant off in the distance calling karrk-karrk. Finally, a united pheasant family is seen close up, as the other families have been; and at that the rabbit bounds home to its family. The only words, besides the karrk-karrk, are "The sun was hot" on the first spread, and "and rabbit came home" on the last. This wordlessness does encourage children to name the animals and find the narrative drift on their own, and a list on the flap ensures that none of the animals goes unidentified. But one might hope for more resonance from a text of only eight words. Also, without any progression, warmth, or visual subplots, the crisp, poster-like pictures seem frozen into a stiff sameness.