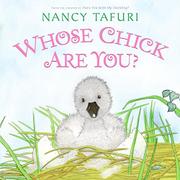 WHOSE CHICK ARE YOU?

In a companion of sorts to her Caldecott honoree, Have You Seen My Duckling? (1984), Tafuri demonstrates why she continues to set the standard in books for the very young. Well-designed from start to finish, the cover shows a fluffy, gray chick cradled in a precisely drawn nest set against a colorfully sunny backdrop. Beginning on the endpapers, a swan couple leads tots and their caregivers to a wetlands nest where an eye-catching close-up reveals a large, white egg. In turn, four neighboring fowl and their offspring ask, “Whose egg is this?” or “Whose egg is that?” In a dramatic four-panel spread replete with sound effects, the cygnet hatches from its egg, claimed by its parents (who’ve usually been tucked into the background) in the elegant parting shot. The boldness of the forms, figure and fonts in the double-page watercolor-and-pen spreads is softened by the harmonious composition. An interactive winner. (Picture book. 1-4)