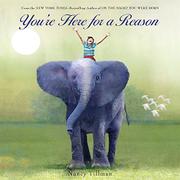 YOU'RE HERE FOR A REASON

The sultana of high-fructose sentimentality reminds readers that they really are all that.

Despite the title, we’re actually here for a couple of reasons. In fulsome if vague language Tillman embeds one message, that acts of kindness “may triple for days… / or set things in motion in different ways,” in a conceptually separate proposition that she summarizes thus: “perhaps you forgot— / a piece of the world that is precious and dear / would surely be missing if you weren’t here.” Her illustrations elaborate on both themes in equally abstract terms: a lad releases a red kite that ends up a sled for fox kits, while its ribbons add decorative touches to bird nests and a moose before finally being vigorously twirled by a girl and (startlingly) a pair of rearing tigers. Without transition the focus then shifts as the kite is abruptly replaced by a red ball. Both embodied metaphors, plus children and animals, gather at the end for a closing circle dance. The illustrator lavishes attention throughout on figures of children and wild animals, which are depicted with such microscopically precise realism that every fine hair and feather is visible, but she then floats them slightly above hazy, generic backdrops. The overall design likewise has a slapdash feel, as some spreads look relatively crowded with verses while others bear only a single line or phrase.

Patchy work, both visually and teleologically.