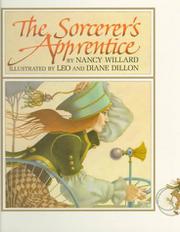 In the spirit of Pish, Posh, Said Hieronymus Bosch (1991, ALA Notable), a reworking of a tale popularized, as explained here, by the poet Goethe as well as by Dukas, whose music fueled the Disney version. The apprentice Sylvia's task is to make garments for the Boschian menagerie of fantastical animals that live in the magician Tottibo's castle; the enchanted tool that erupts out of her control is a sewing machine. Willard's narrative is such an undisciplined cascade of verse that it rivals earlier versions' floods; though the language is musical, and the detail frequently witty, it's an outpouring in need of more judicious channeling. Still, the Dillons have good fun visualizing this torrent of description, slyly tucking faces into architectural details and creating an amusing gallery of mischievous grotesques; the gold-bordered art is rendered with their usual taste and skill. Not a landmark, despite the creators' credentials, but fun. (Picture book. 5-10)