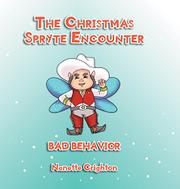 A cranky little girl changes her behavior after a warning from one of Santa’s helpers in this debut rhyming Christmas book.

With bushy red hair and freckles, the narrator—who appears to be age 5 or 6 in the cartoonish images—throws a tantrum to avoid going to the mall on Christmas Eve. But her scheme doesn’t work—and it lands her on Santa’s naughty list. Her grumpy antics are interrupted by Glynt P. Spryte, one of Santa’s Behavioral Elves. He’s been trying to subtly adjust her conduct for months. Now that her deeds have crossed the line, he is paying her a visit. Glynt’s dire warning (no toys!) and his lack of hope that her behavior can improve in time for Christmas give the narrator just the push she needs to clean up her act. “But the best part is this—I LIKE who I’ve become,” she says on the final pages. Crighton’s lines scan well in her series opener, using a vocabulary overly advanced for her narrator’s age. The rhyme scheme and rhythm are reminiscent of Clement Clarke Moore’s famous Christmas poem, though the obvious message may not enthrall mischievous young readers. Glynt is a fun invention: a combination of angry and sorrowful wrapped up in a cowboy outfit. But the uncredited illustrations don’t match the story’s description (he’s called “young” and “handsome” but appears with gray sideburns and a Santa-esque figure).

For families looking for a holiday adventure or parents hoping to improve a child’s behavior, this work may make a good addition to their collections.