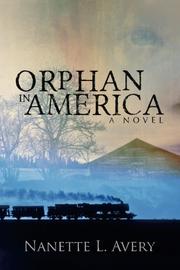 Three generations of a family venture west in this engaging, intricately embroidered 19th-century historical epic by Avery (Jars in a Pioneer Town, 2010, etc.).

The novel opens with a young boy, Alex, watching his mother die, marking the beginning of a desperately mournful early life. Despite being raised in abject poverty in a New York slum, he remains steadfastly true to his father and is horrified when representatives of a child welfare program rap on his front door and forcibly separate him from his beloved Pa. Alex is put on an orphan train, a service that relocated more than 250,000 vulnerable children from East Coast urban slums to the rural Midwest between 1853 and 1929. After he arrives at his destination, he’s thrown into an experience reminiscent of a cattle auction, in which stern-faced farmers and their wives eye each child carefully for potential adoption. No sooner is he introduced to his new parents than he’s set to work on a farm. A quiet, removed child, Alex finds more solace in nature than he does with his adoptive family. He forges a strong bond with the farm’s workhorses, Delilah and Dandy, and shares all his secrets with them. Avery juxtaposes Alex’s story with that of Will and Libby Pickard, a couple in industrial England. They head for America’s Eastern Seaboard on a ship, the Elijah Swift, and soon become embroiled with the powerful Cambridge family of Baltimore, leading to a number of dark, unexpected plot twists. The author spent several years immersing herself in the history and lifestyle of 19th-century rural America, and it shows; by comparison, the English environments seem quaint, but this doesn’t detract from the overall story. The author’s prose charts a close proximity to the land; for example, in one touching moment, young Alex sifts through dirt and finds a tiny seed. He turns “the seed over several times in his fingers,” sensing its importance without fully understanding its potential to yield new life. On occasions such as these, Avery makes readers remember what it’s like to see aspects of the natural world for the first time. She also captures some of the terse correctness of the classic 19th-century epic novel, but her tone also has a contemporary easiness that makes it approachable and pleasurable.