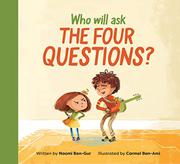 WHO WILL ASK THE FOUR QUESTIONS?

Ben-Ami’s illustrations in this Israeli import by way of the U.K. are so expressive that readers can understand the plot just by looking at the characters’ faces.

There are only three things to know. First: A brother and a sister get into a horrible fight just before the Passover Seder. Second, and maybe the most important: They both love music. She’s always singing, and he’s always strumming an apple-green guitar. And third: By the end of the meal, they’re both singing together again. Readers can learn most of this from the characters’ mouths and foreheads: the boy’s dismissive laugh when his younger sister tries to sing and, in the same picture, her one angry, cocked eyebrow. The only major detail readers need to learn from the text is the actual subject of the argument. At a traditional Seder, the youngest child sings the four questions, a chant that explains the meaning of the holiday, but in this family, the older child, brother Eitan, doesn’t want to give up the job. The problem is solved in a way that’s both entirely predictable and satisfyingly surprising. Evie struggles with the words, and Eitan joins in to help her out. Throughout the meal, just about everyone is smiling. (The characters are all white and mostly related.) But in these illustrations, each person’s smile is distinctly, beautifully unique.

The ending is touching enough that the story is almost as vivid as the people in the pictures.