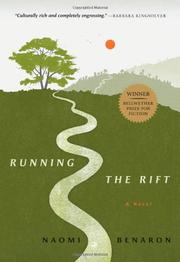 Benaron’s first novel, about a young Rwandan runner whose Olympic ambitions collide with his country’s political unrest, is the recipient of the PEN/Bellwether Prize for “fiction that addresses issues of social justice.”

In the 1980s, Jean Patrick Nkuba and his older brother Roger are both talented athletes and scholars living an idyllic existence with their Tutsi parents at the school where their father teaches. Then Jean Patrick’s father dies in a car crash just as tensions begin to build between the Tutsis and Hutus. Although the Tutsis are increasingly discriminated against, Jean Patrick’s running talent sets him above the fray, especially after his Olympic potential is recognized in his early teens. Even Roger, who has joined the Tutsi Rebels, wants Jean Patrick to do whatever it takes to represent Rwanda in the Olympics. So Jean Patrick follows his Hutu Coach from high school to college. At first Coach arranges for Jean Patrick to have false Hutu identification papers. Then the government decides that allowing a Tutsi to complete internationally will bolster its human-rights reputation so Jean Patrick is made the Tutsi exception and treated like a beloved celebrity. He even attends a reception with the president. Meanwhile he has fallen in love with Bea despite Coach’s disapproval—Bea and her journalist father are Hutu dissidents against the repressive Hutu government—and made friends with a visiting professor from Boston. As the conflict intensifies, Jean Patrick must make increasingly difficult choices, a key one being whether to trust Coach. The escalating violence of Hutus against Tutsis becomes a national mania that ultimately controls Jean Patrick’s personal destiny.

The politics will be familiar to those who have followed Africa’s crises (or seen Hotel Rwanda), but where Benaron shines is in her tender descriptions of Rwandan’s natural beauty and in her creation of Jean Patrick, a hero whose noble innocence and genuine human warmth are impossible not to love.