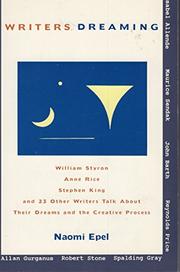 Twenty-Six Writers Talk About Their Dreams and the Creative Process

It's well known that Coleridge dreamed, word-for-word, his great poem ``Kublai Khan''—but not that William Styron wrote the opening paragraphs of Sophie's Choice after dreaming of a woman with tattooed numbers on her arm, or that Stephen King based the horrific Marston House of Salem's Lot on a dream he had as an eight-year-old. Here, Epel (host of a Berkeley-based radio show) presents commentary from 26 writers on how dreams have influenced their work and their lives. Though the commentary derives from interviews, Epel has edited out her questions and sewn the answers into smooth-flowing essays from the likes of Maya Angelou, Clive Barker, Elmore Leonard, Gloria Naylor, Reynolds Price, Anne Rice, Robert Stone, and Amy Tan—a remarkable number of whom keep close track (often in dream-journals) of the dreams from which they draw literary ideas or at least inspiration: John Barth says that once every four years or so, he enjoys a ``Charles-Dickens-scale dream,'' one ``with lots of complications and even subplots.'' And it's interesting to note that, perhaps in keeping with the intimacy of the dreaming that influences them, a number of these authors disavow word processors in favor of more intimate writing tools: Elmore Leonard writes in longhand and then transcribes using an Olympia manual typewriter, while Spalding Gray corrects his longhand again in longhand, with a red-ink pen. Full of surprising insights, these interview/essays make a genuine contribution to our understanding of the writing process. (Twenty-six b&w photos—not seen)