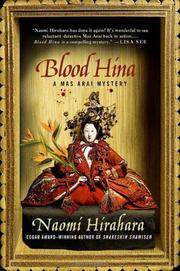 After a rocky period, Mas is very close to his daughter Mari, who’s recently made him a grandfather. So he’s doubly fretful at the wedding rehearsal and dinner of his best friend, Haruo Mukai. Besides worrying about his responsibilities as best man, he’s sorry to see the strained relationship between Haruo and bride-to-be Spoon’s daughter, Dee, who has a history of drug use. Then Mas gets a late-night call from the heartbroken Haruo, announcing abruptly that the wedding is off. Apparently Dee has convinced her mother that Haruo, who spends a little too much time gambling at local card clubs, stole Spoon’s valuable doll collection from Hina House. When Mas goes to see Spoon, he faces an uncomfortable encounter with police who mistake him for an intruder before learning from Spoon that she called off the wedding because of her own commitment jitters. Since the dolls are still missing and fragile Haruo remains the prime suspect, however, Mas decides to investigate. The theft is easily traced to the troubled Dee, but that news takes Mas only so far in recovering the dolls, a task that involves seamier quarters of the city. As Haruo continues to spin out of control, Mas must juggle his amateur sleuthing with the demands of multiple gardening clients.

Aging and financially struggling Mas Arai’s fourth case (Snakeskin Shamisen, 2006, etc.) is shaggy but very engaging, written with heart and depth, and starring an Everyman for our time.