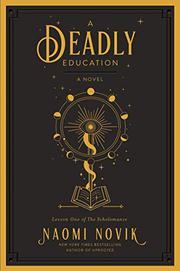 From the The Scholomance series, volume 1

A loosely connected group of young magicians fight horrendous creatures to ensure their own survival.

Galadriel "El" Higgins knows how dangerous the Scholomance is. Her father died during the school's infamous graduation ceremony, in which senior students run through a gauntlet of magic-eating monsters, just to make sure her pregnant mother made it out alive. Now a student herself at the nebulous, ever shifting magic school, which is populated with fearsome creatures, she has made not making friends into an art form. Not that anyone would want to be her friend, anyway. The only time she ever met her father's family, they tried to kill her, claiming she posed an existential threat to every other wizard. And, as a spell-caster with a natural affinity for using other people's life forces to power destructive magic, maybe she does. No one gave Orion Lake that memo, however, so he's spent the better part of the school year trying to save El from every monster that comes along, much to her chagrin. With graduation fast approaching, El hatches a plan to pretend to be Orion's girlfriend in order to secure some allies for the deadly fight that lies ahead, but she can't stop being mean to the people she needs the most. El's bad attitude and her incessant info-dumping make Novik's protagonist hard to like, and the lack of chemistry between the two main characters leaves the central romantic pairing feeling forced. Although the conclusion makes space for a promising sequel, getting there requires readers to give El more grace than they may be willing to part with.

A perilous, magic-school adventure that falls short of its potential.