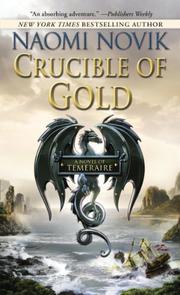 Previously, Laurence was convicted of treason and transported for preventing the British from infecting the enemy French dragons with a fatal disease. As this volume opens, ambassador Arthur Hammond ends Laurence’s Australian exile, restoring his commission and appointing him to negotiate with a force of African dragons sent by Napoleon to Brazil. Along the way, Laurence and his companions endure shipwreck, capture, stranding on an island and a desperate journey through the Incan Empire (the local dragons prevented the conquistadors from succeeding in this universe, although the smallpox they left behind has proved fairly devastating). While there is some intriguing but sadly limited time spent examining the differing political, societal and spiritual roles played by dragons in various cultures, most of the plot is devoted to nonstop action. Underneath it all, however, Novik is ambitiously exploring what it is to be a moral man in a world where such a quality is considered inconvenient at best; a man who, despite the powerful leverage provided by his dragon, may never be able to fully triumph over rampant corruption and petty opportunism.

In some ways, a repeat of what’s gone before, but despite that, thoughtful, good fun.