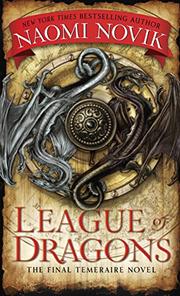 From the Temeraire series, volume 9

Ninth, and last, of the Temeraire historical fantasy series (Blood of Tyrants, 2013, etc.), reimagining the Napoleonic Wars in a world where humans coexist with intelligent dragons.

Napoleon’s invasion of Russia has been foiled. Following his adventures in the Far East, Capt. William Laurence and his dragon partner, Temeraire, assist the Russian forces to harry the retreating French—but Napoleon escapes to Paris, where he plots a counterstroke. While raising new human armies, he promulgates a remarkable political document granting any dragons that will fight for him—including the ferals who owe allegiance to no government—autonomous territories and humane treatment. This offer proves a powerful enticement, especially to dragons from Russia (historically treated with great cruelty) and Britain (where attitudes range from callous indifference to outright hostility). Even worse, from Laurence’s viewpoint, Napoleon has stolen the egg of Temeraire (whose weapon is the Divine Wind, a rock-shattering roar) and Iskierka, his fire-breathing mate, knowing that the egg is enormously precious to them and that they will go to any lengths to recover it. So it should be a simple matter to lure Laurence and the dragons into a trap. One of the great pleasures of this long, sometimes uneven, but always fascinating series is the way Novik meticulously and patiently accumulates details of the various types of dragon, each having its particular aspect, talents, and behaviors, and the spectrum of attitudes humans hold toward them. Though employing a modern vocabulary, the early-19th-century writing style precisely captures the rhythms, manners, and sensibilities of the period. The action prose is vivid and immediate, especially when adopting a dragon’s perspective. You feel that, given the existence of dragons, the alternate history the author envisions might well have come to pass.

Not the finest entry in the sequence, being slow to gather momentum and somewhat patchy, but overall a satisfying conclusion to a remarkable series.