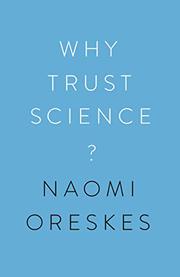 A scholarly evaluation of arguments in favor of science.

Although she has not written a polemic but rather a philosophical examination of ideas, Oreskes (History of Science, Earth and Planetary Sciences/Harvard Univ.; co-author: The Collapse of Western Civilization: A View From the Future, 2014) addresses a topic. In his introduction to this book, based on the 2016 Princeton University Tanner Lectures on Human Values, Princeton professor of politics Stephen Macedo writes that she “defends the role of values in science, discusses the relationship between science and religion, and sets out her own credo as a scientist and defender of science.” Following the introduction, the text contains commentaries from four colleagues and concludes with Oreskes’ replies. Proofs are limited to mathematics. No scientific statement can be proven, and even Nobel Prize winners have changed their minds, so Oreskes joins a distinguished line of thinkers who explain why we should trust the findings of the scientific community, many of which people reject if they “clash with their economic or cherished beliefs.” After ruling out the major philosophical approaches to its authority—empiricism, induction, fallibilism, etc.—Oreskes concludes that good science is a collective enterprise whose objectivity arises from the social practices of peer review, criticism, and correction. She emphasizes that on most hot-button science-denial issues—e.g., evolution, vaccine safety, climate change—“there is a scientific consensus. What is lacking is cultural acceptance by parties who have found a way to challenge the science.” Thus, reversing climate change will require government regulation and interference in the free market, which is anathema to conservatives, who respond by questioning the science. Unfortunately, it also means that additional scientific evidence is unlikely to win them over. In this convincing yet often dense argument, Oreskes clearly reminds readers that science has consistently brought home the bacon.

Not for general readers but interesting debate fodder for the scientifically inclined.