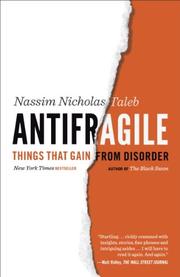 Things that Gain from Disorder

Engineer and trend-watcher Taleb builds on his best-selling hit The Black Swan (2007) to limn a world of uncertainty and chaos.

The world is a fragile place, full of surprises. Humans—and especially their markets—hate surprises in general. Small wonder, then, that we spend so much effort trying to make our buildings earthquake-proof and our computers virus-proof, that things prophylactic (no, not that) occupy so much of our thoughts. Taleb calls this “antifragility,” writing, “Just as we cannot improve health without reducing disease, or increase wealth without first decreasing losses, antifragility and fragility are degrees on a spectrum.” This being a book meant to solve big-picture problems that may or may not be real for most readers, Taleb urges that many of our efforts are misguided, if understandable. He scorns the “fragilistas” so afraid of their own shadows that they put systems into place “in which the benefits are small and visible, and the side effects potentially severe and invisible.” His current tract is meant as a corrective, and it’s mostly successful at what it aims to do, if sometimes a little daunting—readers are asked, for instance, to grapple with terms such as “apophatic,” “hormesis” and “Mithridatization,” all useful but thorny all the same. In what a college comp instructor might mark as a shift in diction, however, he throws in more familiar language: “Redundancy is not necessarily wussy; it can be extremely aggressive.” And good thing, too. Touring the landscape of uncertainty, Taleb conjures up a few first principles and praises a few models, not least of them Seneca, the great Stoic philosopher who also “happened to be the wealthiest person in the Roman Empire.” Mostly, though, the book is an accumulation of small examples and counterexamples, more suggestive than prescriptive.