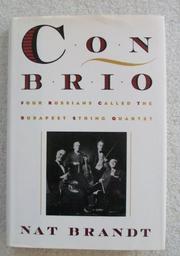 A relaxed and engaging portrait of the incomparable chamber- music ensemble (1917-67) and its four most important principals, gracefully interwoven into a history of string-quartet playing in America. Brandt (The Congressman Who Got Away with Murder, 1991, etc.) was connected to the famed Budapest String Quartet during its headiest days: His father-in-law was the violist Boris Kroyt. Brandt's affection for the men who shaped the group's intimately communicative style (Joseph Roisman, first violin; Alexander (``Sasha'') Schneider, second violin; Kroyt; and Mischa Schneider, cello) never constrains his acute observations on the often difficult temperaments of four virtuosi who sublimated their own egos to achieve previously unattained artistic unity. Russian and Polish Jews, Roisman and company fled Hitler's Europe for an uncertain future in America, where chamber music was among the last forms of serious music-making to be accepted. Extraordinary talent prevailed, however, and the Budapest became quartet-in-residence at the Library of Congress, giving an annual series of sold-out (and widely broadcast) recitals using Stradivarius instruments donated to the Library by a wealthy patroness. Among other fascinating sidelights, Brandt illuminates the democratic decision-making procedures the group employed to achieve a concert of musical vision: Contested points of interpretation were put to a vote, with any tie broken by ``the composer's vote'' (cast by the instrumentalist whose predecessor had, with respect to the particular piece in question, won a match-stick drawing and whose initials had been noted on the first page of the score). This neatly written volume appears following Sony's CD rerelease of the early Beethoven quartets recorded in 1951-52 by the same personnel (with the exception of Jac Gorodetsky for Sasha Schneider). Reading the book while listening to the recording reinforces the impression of the Budapest's unanimity of cultural background and creative idealism. As the world that shaped this paragon fades, the legacy remains, thanks to modern technology and this sympathetic record. (Valuable discography and 26 halftones)