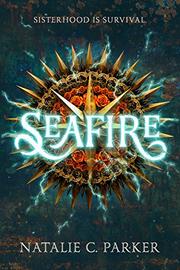 From the Seafire series, volume 1

An all-female ship of vengeance-seekers sails against a brutal, tyrannical warlord.

In a future where only shreds remain of the lost technological advancements of the old world, Aric Athair rules through his massive fleet of Bullets, conscripted, drug-dependent soldiers. On the verge of an attempt to escape Aric’s reach, Caledonia and her best friend, Pisces, lose their families to Bullets. Four years later, they’ve rebuilt Caledonia’s mother’s ship and have a new family in their large crew. After nearly losing Pisces on a mission to destroy a drug-farming barge, Pisces turns up with a Bullet in tow; he saved her life, so she wants to spare his in turn. He claims to be a deserter and gives information about a bounty on their ship—and says Caledonia’s and Pisces’ brothers are alive, and he can help rescue them. Caledonia must evade the better-armed fleet that is after her and keep her crew alive while deciding if she should trust him. An obligatory romance is tacked on (and is less compelling than a background, low-key lesbian love story), but the real relationships are the deep bonds between the women of Caledonia’s crew. Along with openly feminist themes, the crew is racially diverse—and in this future world, skin color appears to carry no connotations.

The cliffhanger promises readers a return to this intriguing setting for more action.