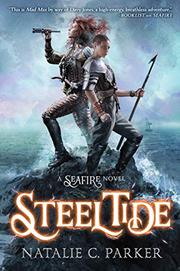 From the Seafire series, volume 2

After being badly wounded, Caledonia wakes up in a camp of renegade former Bullets. Having shaken their forced drug addictions to Silt, they call themselves Blades and have built a small culture where consent is paramount. Caledonia’s convalescence with the Blades opens the door for more worldbuilding but soon is interrupted by Bullet hostility. Caledonia, who’s been eager to get back to sea, rallies the Blades in a scheme to steal a ship with a deal—they help her get a ship, and she’ll help them break the Net and escape Aric’s sphere of control. But a revelation intensifies her need to find her crew without delay. The fast-paced plot—packed with fight scenes, naval battles, and adventurous sailing—still manages to devote time to fleshing out the philosophies and agency of secondary characters as well as Caledonia’s struggles and growth as a leader of an unconventional coalition. Romantic storylines for the most part take a back seat in favor of more pressing survival concerns, though queer relationships are positively represented. Race’s only significance is descriptive—most characters are varying shades of brown, though some—like Caledonia—are white. The explosive finale breaks the fictional world’s status quo in a way that will have readers eager for the final installment.

An immersive, adventurous pleasure that improves on the first book.