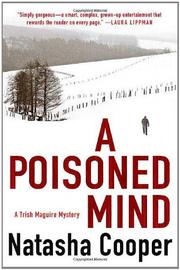 A tormented teen and a tricky liability case add up to double trouble.

Barrister Trish Maguire (Evil is Done, 2007, etc.) has recently been elevated to Queen’s Counsel, but so far no cases have come her way. So she’s helping head of chambers Antony Shelley defend a corporation handling hazardous waste against a suit brought by the widow of a man killed in an explosion. Angela Fortwell and her husband had left high-powered jobs years ago to run a sheep farm. Not very successful, and alienated from their only child, they scraped along by taking in paying guests and monitoring a hazardous waste site on their farm. When Antony is nearly killed in a street accident, Trish is forced to take over the case. She has the additional problem of managing the volatile friendship between her younger brother David and his school friend Jay, a clever boy with a violent temper who’s the fatherless son of an alcoholic mother. Her boyfriend George has his own house but spends a good deal of time helping out with the boys while Trish works on the unpalatable case. Using a recess to explore other possible explanations, Trish emphatically doesn’t like what she finds.

An intricate, literate entwining of a legal mystery with a complex character’s muddled life.