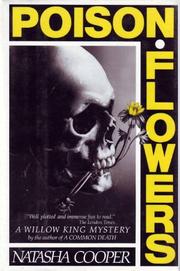 Colorless, efficient civil servant Willow King, who moonlights as sybaritic romance-novelist Cressida Woodruffe (A Common Death, 1990), takes a fancy to solving a series of murders described to her by inamorata Inspector Tom Worth: poisonings by different vegetable toxins of four victims—a Fulham architect and his girlfriend; a schoolmistress retired to Newcastle; and an actress in Islington—who seem to have nothing in common. Calling on her network of well- connected friends, Willow soon finds the common denominator: patent attorney Caroline Titchmell, the architect's younger sister, who knew all four victims. Unable to see gentle Caroline as the killer, Willow labors to solve the puzzle before the obvious culprit succeeds in poisoning her or running her down with a car. The mystery is conscientiously spun out, but the trappings and tone—cozy, humorless, oozing with self-approbation—are redolent of Cressida's romances. For like-minded readers.