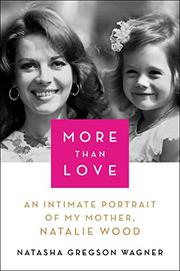 An Intimate Portrait of My Mother, Natalie Wood

A Hollywood actress reflects on the life and death of her mother, Natalie Wood (1938-1981).

Wagner was 11 years old when her mother, with whom she felt inextricably “entwined,” drowned. In this eloquent debut memoir, the author examines Wood’s life and the relationship they had while offering her perspective on the mysterious circumstances surrounding her mother’s untimely demise. Born Natalia Nikolaevna Zakharenko in San Francisco, Wood was the daughter of Russian immigrants. At age 4, she caught the attention of a Hollywood director. Five years later, Wood had not only played opposite such legends as Orson Welles; she had also earned enough celebrity status to negotiate movie contracts that included jobs for the star-struck parents who would control their daughter throughout adolescence and young adulthood. In 1957, Wood married Robert Wagner, her “childhood movie crush,” in part to escape a lonely and restrictive family life. The two divorced and then reunited in the early 1970s, after Wood ended her marriage to the author’s birth father, producer Richard Gregson. For most of the author’s childhood, life with Wood and “Daddy Wagner” was idyllic. But as the author remembers her beautiful mother presiding over dazzling celebrity parties, she also remembers the terror she felt being apart from Wood, which haunted her long after her mother’s death. When the author’s parents returned to full-time acting, the pressures mounted. Wood developed a dependence on alcohol, high levels of which were found in her blood after she died. The author denies years of tabloid speculation that Robert Wagner murdered her mother, suggesting instead that the reports, which came from Wood’s envious younger sister and a family employee, were motivated by greed. Fascinating as these details are, it is Wagner’s sensitive, probing depiction of how she coped without Wood that makes for the most compelling reading in a book that celebrates both a brilliant actress and a bygone film era.

An intimate and heartfelt memoir.