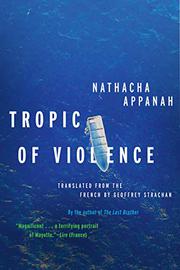 A teenage boy navigates a life of poverty and brutality on the island of Mayotte in the Indian Ocean.

Moïse is barely 14 when his adoptive mother, Marie, suddenly dies. They live on the tropical island of Mayotte, officially a “department” of France. Every year, scores of undocumented immigrants—from the Comoro Islands, Africa, and elsewhere—wash up on Mayotte’s shores in small boats known as kwassa-kwassas. That’s how Moïse’s birth mother arrived. One night, she appeared in the hospital where Marie worked as a nurse, handed over her baby, and disappeared. In her latest novel, Appanah (Waiting for Tomorrow, 2018, etc.) interrogates difficult truths about immigration, class, poverty, and race and doesn’t settle for any easy answers. After Marie dies, Moïse falls from a middle-class life to one of desperation. He turns to a local shantytown and a brutal gang leader known as Bruce. In short, lyrically vivid chapters, Appanah alternates from one character’s point of view to another’s—some of them, like Marie, speaking from beyond the grave. “I used to think,” Moïse explains, “that on the day when I discovered the truth about my birth, something in my head would click into place.” Things don’t work out that way. Appanah, who was born in Mauritius and now lives in France, has written a crucial, timely novel. In it, she shows that beyond all the good intentions of the well-meaning lies a seething, anguished world that will require more than a few NGOs to recover. Moïse is just one of its victims.

Searing, lyrical, and ultimately devastating, Appanah’s latest novel might be her finest yet.