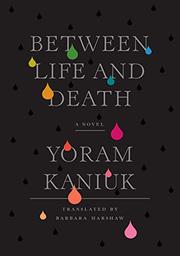 BETWEEN LIFE AND DEATH

A coma inspired this renowned writer to reflect on his life, his work, and what it means to die.

Kaniuk, an Israeli artist and writer who died in 2013, was 74 when he developed a cancerous growth in his colon. The growth was removed, but Kaniuk spent four months in a coma and several months after that in a dreamlike trance, hovering between the two more definite states that have given his new book its title. In this “autobiographical novel” originally published in Israel in 2007, Kaniuk (1948, 2012, etc.) describes that experience: the confusion of the surgical theater, the recurring infections and other complications, the long-drawn-out recovery. More than all that, though, he focuses on the hallucinatory months when he drifted in and out of consciousness. As he says, “I felt like the monk who didn’t know if he dreamed he was a donkey or if he was the donkey who dreamed he was a monk.” He shifts from descriptions of memories to dreams to waking life, sometimes within the same sentence. By doing so, he undermines the standard assumption that only lucid consciousness can be comprehensible. “And why is it really so important to know if all that was true or not?” he writes. “If I think I saw, I saw.” In this way he links the experience to a lifetime’s habit of invention. “I would make up reality and I still do,” he writes. If his looping sentences sometimes make his precise meaning difficult to determine, it’s a forgivable quirk. Still, the book’s shapelessness becomes tiresome after a while. One longs for a moment of clean, clear lucidity. Instead, the narrative ravels outward.

In this lyrical account of illness and nearly dying, moments of beauty are interspersed between longer sections of cryptic obscurity.

A TALE OF LOVE AND DARKNESS
by Amos Oz
Nonfiction

NOTHING TO BE FRIGHTENED OF
by Julian Barnes
Newsletter sign-up