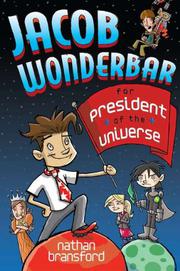 JACOB WONDERBAR FOR PRESIDENT OF THE UNIVERSE

From the Jacob Wonderbar series, volume 2

What do you do after nearly breaking the universe? Run for president!

Seventh-grader Jacob Wonderbar and his best friends Sarah and Dexter had one wild adventure across space and time last year (Jacob Wonderbar and the Cosmic Space KAPOW, 2011). Jacob discovered that his missing dad might be in space among the Astrals, but after he caused the great space kapow, the king of the universe sent the trio back to Earth. Now the king has nominated Jacob to run for president of the universe against Prince (and erstwhile space pirate) Mick Cracken, who hates Jacob. Jacob promises to clean up his act and avoid his signature pranks, but Mick promises corruption and lies. Both candidates must compete in three trials and make appearances and speeches across the cosmos. Jacob also has to dodge Mick's "Earther"-hating soldiers from the planet Valkyrie. When Princess Catalina declares herself Jacob's running mate and Sarah leaves Jacob's campaign for Mick's, it's anyone's game. Who will win? And will the Space Chimps ever get their bananas? Bransford's second slapstick space saga is as much fun as the first. Couched in the space silliness is a surprisingly sharp satire of American electoral shenanigans, making the book especially timely.

The final pages definitely set up volume three, so a sequel can't be far... far away.