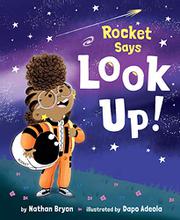 Rocket is on a mission…to get her angst-y teen brother to put down his cellphone and look up.

An aspiring astronaut, Rocket makes it a point to set up her telescope and gaze at the stars every night before bedtime. Inspired by Mae Jemison, Rocket, a supercute black girl with braids and a coiffed Afro, hopes to be “the greatest astronaut, star catcher, and space walker who has ever lived.” As the night of the Phoenix meteor shower approaches, Rocket makes fliers inviting everyone in her neighborhood to see the cosmic event at the park. Over the course of her preparations, she shares information about space-shuttle missions, what causes a meteor shower, and when is the best time to see one. Jamal, Rocket’s insufferable older brother, who sports a high-top fade and a hoodie, is completely engrossed in his phone, even as just about everybody in the neighborhood turns up. The bright, digital illustrations are an exuberant celebration of both space and black culture that will simultaneously inspire and ground readers. That the main characters are unapologetically black is made plain through myriad details. Rocket’s mother is depicted cornrowing her daughter’s hair with a wide-toothed comb and hair oil. Gap-toothed Rocket, meanwhile, makes her enthusiasm for space clear in the orange jumpsuit both she and her cat wear—and even Jamal’s excited by the end.

Outstanding—a breath of fresh air, just like Rocket herself.