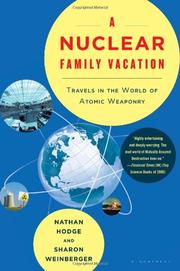 Travels in the World of Atomic Weaponry

by Nathan Hodge and Sharon Weinberger

An unlikely itinerary for WarGames addicts, with bonuses for geopolitics buffs as well.

Wired contributor Weinberger (Imaginary Weapons: A Journey Through the Pentagon’s Scientific Underworld, 2006) and Jane’s Defence Weekly contributor Hodge haven’t exactly hit on a new idea with this tour of nuclear facilities of the Cold War and the present; fellow journalists Tad Bartimus and Scott McCartney scooped them in 1991 with Trinity’s Children: Living Along America’s Nuclear Highway. The older book remains readable and oddly entertaining, as is the newcomer, which has many virtues of its own. Not least, and perhaps most newsworthy, is the authors’ “nuclear junketeering” trip to Iran, a nation whose nuclear history, they smartly observe, “was not always that of a pariah state.” Indeed, back when the shah was in power—all the way back to Eisenhower’s Atoms for Peace initiative—America was glad to see Iran develop nuclear facilities, even supplying a research reactor that went online in 1967. By 1976, the authors add, Iran was projected to have 20 nuclear plants, a development stymied by unrest and revolution that, perhaps ironically, delayed the country’s nuclear growth for decades. That was then; now Condoleezza Rice huffs that “Iran needs no civil nuclear power.” These are weird times indeed, and this travelogue takes readers into some of the weirder corners, including Wyoming missile silos and the nation’s premier nuclear museum, in which one exhibit boasts two seemingly contradictory messages: one that nukes aren’t scary, “while also demonstrating that nuclear weapons weren’t terrifying enough to make anyone think twice about using them.” Weirdest, perhaps, is the authors’ venture to Siberia, where plenty of old-school hard-liners are still eager to lob a few ICBMs our way. The authors write with intelligence and good humor, though they end on a disquieting note: The last president to spend much time thinking about nuclear weapons was Reagan. Meanwhile, we’re sitting atop “a nuclear arsenal that serves many purposes, but no particular end.”

A vacation for some, a nightmare for others. Either way, well worth reading.